The Calhoun School celebrated the opening of its new Green Roof Learning Center in May 2005. The space was designed by FXFowle Architects, PC as part of a four-story addition to the school's main building at 81st Street. The roof's semi-intensive design means it can be used as a functional outdoor space.

How Calhoun Uses Its Green Roof

Calhoun’s renowned lunch program often uses produce from our Green Roof herb garden. The Green Roof has been used as part of classroom curriculum on topics such as environmental and plant biology studies.

The Green Roof has also been used for community events, a source of inspiration for poetry classes, and a favorite escape from urban life!

How the Green Roof Came to Be

The idea for adding a Green Roof was initially suggested by a Trustee. The recommendation came at an opportune time, just as Calhoun was in the drawing-board stages for the four-story addition to the school's main building.

Design Award
Calhoun and FX Fowle Architects, PC, were named recipients of the 2007 Merit Award for innovative learning environments by DesignShare, an industry resource in the area of school construction. DesignShare jurors called the four-floor addition a "courageous design," with special mention of the Green Roof as "an innovation in the architecture for learning."

EE Ford Grant
Calhoun was among the small number of schools nationally that forged ahead in building a Green Roof, and was the first educational institution in New York City to build an eco-friendly Green Roof that is also functional for educational use. In recognition of Calhoun's leadership role in this area, the project received a $50,000 matching grant from the E.E. Ford Foundation, which supports innovative educational programs pioneered by independent secondary schools.

Top Green School
Shortly after the opening of the Green Roof, Calhoun was honored as one of the top Green Schools in the country by The Green Guide (July/August 2005). It has also been featured on greenroof.com. 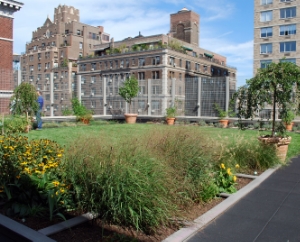 Tours of the Green Roof are open to the public.