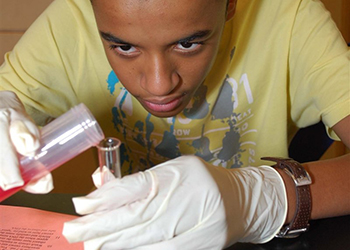 Census studies ask us to identify and categorize ourselves. But where do these categories come from? Are they just based on perception or scientific fact?

There's a scene in the movie Race: The Power of an Illusion-Episode I when high school students from a racially diverse urban high school test their own DNA and send the samples to a lab. The students are surprised at the results, which reveal genetic connections that belie their differences in skin or hair color, ethnic background and heritage.

It is a powerful message that was brought home to seventh graders this fall, who screened the award-winning documentary film as part of their yearlong English/social studies curriculum, “Perceptions: Finding Ourselves in the World." As they continued through their studies of world history and literature, the students were asked to question the lens through which they look at other cultures. This exploration gained even more relevance when science teacher Alba Polsley joined the interdisciplinary program by adding a DNA unit to her fall syllabus as well as a replication of the experiment conducted in the PBS documentary.

“I had been teaching my seventh graders about chemical bonds—covalent and hydrogen bonds—so they already understood how protein molecules are connected to form a structure [protein molecules are the bases of DNA structure]," says Alba. “So it was easy to expand the unit and redirect my lesson plans to the study of DNA."

The students began with basic questions: what is DNA; how is it related to living organisms; and how are all living organisms related? “They learned that 99.9 percent of DNA is similar in everyone, and that what makes us different are traits," says Alba. “The students figured out that every living organism has the same four protein bases that make up DNA. The only difference is the amount of each protein base, which is limitless."

Discussions ensued about genes and traits, similarities and differences—all of which echoed the themes in the film they had watched and the questions they were pondering in social studies and English class.

The students discovered, for instance, that the color of skin is a trait, and that traits can change over long periods of time, depending on environment. “For instance, if I have dark hair but move to place with a lot of sun or salt water, my hair will get lighter and skin will get darker. Over thousands of years, that can become a dominant trait." Alba notes that the evolutionary theory explains that the settlement of modern humans around the globe led to the mutation of various traits; hair color, skin color, body hair, shape of eyes. 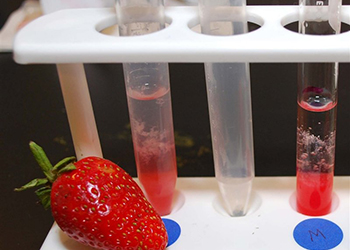 Alba asked the students to conduct a survey at school and home (five interviews per student) about common physical traits—widow's peak, eye color, hitchhiker thumb, earlobes attached or unattached. They converted the information about traits to histograms [a graphical display of tabulated frequencies, shown as bars], to see patterns and understand which traits are more common than others.

Most important was the selection of an experiment that would support what the students were learning about DNA while reinforcing the skill sets that had been introduced earlier in the semester regarding the scientific method and the writing of lab reports. The chosen experiment was to extract DNA from strawberries, with observations and conclusions to be included in a final DNA portfolio.

Seventh grade science is a perfect time for a more advanced understanding of the scientific method and how to write lab reports, says Alba, who also requires the students to create portfolios and self-evaluate their work. Final DNA portfolios included the results of the students' surveys, histograms, photos and drawings, in-class tests, working papers and self-evaluations. In the process, they learned what a portfolio is, and how to put it together carefully and completely. One group of students, she says, went so far as to make a DNA rap video.

The final activity in the class—and one the students were most looking forward to—was one that was shown in the film Race: The Power of an Illusion; they were preparing to do a swab test for DNA samples from the students, and have them tested by an international lab that would identify each person's genetic heritage. “These mitochondrial DNA tests have shown that all humans can be traced back to Africa," Alba says. “They will give the students further evidence that physical differences do not indicate 'different races.'" 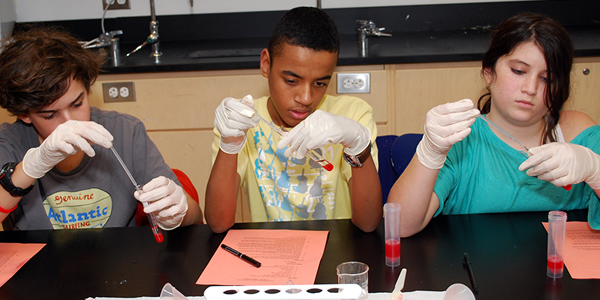 The seventh grade DNA studies were augmented by two University of Utah Web sites that Alba says are age-appropriate, informative and very interactive: Learn Genetics, for its program on cells and a basic tour of DNA.

Alba also used music to help the kids learn and memorize the scientific jargon of earth sciences, life sciences and physics: The first song used was "We are DNA," by the Brooklyn-based group Beats, Rhymes, and Science, from Flocabulary [original hip-hop music and standards-based curricular materials to teach academic content for grades 3-12] the second song was "Meet the Elements" from the album Here Comes Science by They Might Be Giants (another NYC-based group).