Students in Mirta De Drake's Upper School introductory Spanish class are assigned to research a work of art by the Mayans, Incas or Aztecs that can be found in the American Museum of Natural History (AMNH). But in the fall of 2011, what began as a straightforward research paper turned into a bilingual project and powerful collaboration with the Natural History museum's education department.

What was the original idea for the research project? 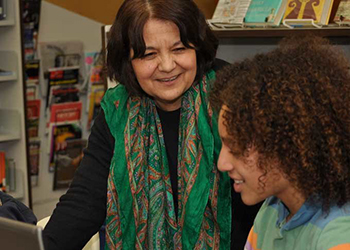 Mirta: I always like to design classes with multidisciplinary ideas, mixing language with culture. The new schedule, which was introduced this year with double-block classes, allows us to take those activities outside the classroom. So the initial idea was to have the students do a research project using the resources of the American Museum of Natural History, which has a complete section dedicated to Mesoamerican [and Incan] cultures in the 15th and 16th centuries. The research started in our library. Students were divided into groups and asked to select an area of research related to a work of art that was in the museum. They needed to find their own resource materials. Some were only in Spanish, so they needed to translate it; they were not allowed to use automatic translation. Once their research was completed, we went to the museum to see the artwork in person.

In the museum, I told the students, "This is like a game--now you need to look for the art that you already researched in the books. When you find it, you need to write your own descriptions."

How did the research project turn into a Spanish translation exercise?

Mirta: The students who were studying the Mayan calendar were surprised that all the explanations at the museum were only in English. They suggested that they write their own descriptions in Spanish. The students began learning how to make the equivalent translation from one language to another. And they weren't just translating the descriptions presented in the museum exhibit; they were writing from their own perspective. I helped them edit. Then I started getting my more advanced Spanish-language students to help edit. So it was a good exercise for them, too.

How did the collaboration begin with the museum?

Mirta: On one of our early trips to the museum's third floor, one of the volunteers working there asked what we were doing. I explained that my students were using the museum as a classroom, writing their own descriptions of some of the exhibits in Spanish. Later, I contacted Donna Sethi (director of the Education Department), who wrote back, “I congratulate your classes"—and she asked me for all the translations so she could use them. I couldn't believe it! I also sent her a photograph that one of the students took of some of her classmates giving a hug to the Olmec head [seen at the top of this page]. When I sent this to our museum contacts, they loved it! 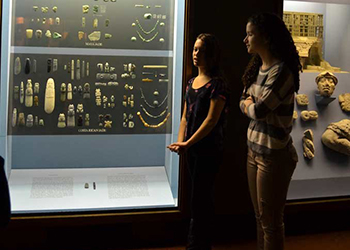 How will the museum use these translations?

Mirta: Donna said she's going to start using them for training volunteer docents so they can help Spanish-speaking visitors.

How has this project been valuable to your students?

Mirta: They're finding out all the possibilities for language: that [they] can do something to help the community while they're learning how to use their language skills. If they can learn how to translate, they have a tool for life. And it's part of our philosophy of education; they're learning by doing. Also, I think this project has allowed me to help students with different learning styles and interests. For example, when I suggested to the students that they select a sculpture or ceramic work for study, one student said, “I like math; can I make a connection with the idea of numbers and the Aztec calendar?" My goodness, yes, of course! Or another student said, “I'd like to study design. So can I design a dress, or something the Incas or Aztecs wore?" This project worked so well, I think we can do the same with some of the advanced classes . . . perhaps at the Met?