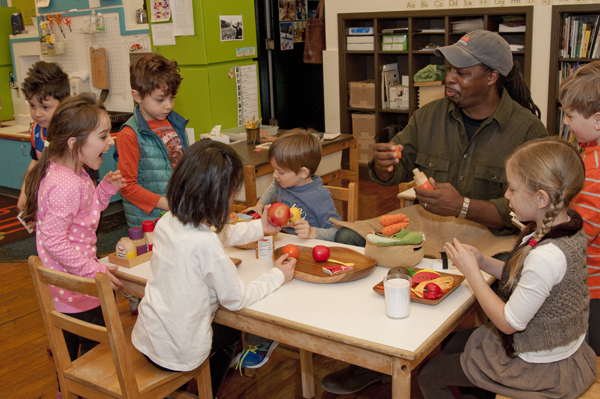 The most exciting news item from two of our kindergarten clusters is the launch of a food study!

In the beginning of the year, teachers got together to map out our year, and we decided as a team that we wanted to devote a concentrated period of time to exploring emergent curriculum and extended project work.

Emergent curriculum is, simply explained: the exploration, questioning, and deepening of understanding of a topic or idea that naturally emerges from the work, play, and conversations of the class. Teachers look for lines of interest and inquiry that happen amongst kids (or even a small group) and then experiment with the potential expansion into a broader study. This is such an exciting endeavor for teachers and students and we are really excited about embarking on this journey together.

Our project idea emerged out of a simple lunchtime conversation between four children about dumplings and bloomed into a larger discussion about the yumminess of Chinese food. We started asking kids about what they knew about restaurants in general. We wondered together if we were to create our own restaurant, how would we do it? What would we need? What would we serve? Ideas about menu items and even interior design began flowing and we realized we had a strong common interest.

Now it was time to include the rest of the kids. A simple discussion about "yum" versus "yuck" foods and personal preferences brought the others into the fold. Teachers began to brainstorm and plan some restaurant study ideas when we began to realize that not everyone actually has access to restaurants, and that while many of us have experienced eating out, the experience is not necessarily available to everyone for a variety of reasons ranging from financial access to allergies and safety. 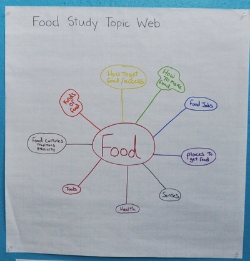 Since the beginning of the year, we have been very busy chefs. We have baked so many different dishes and delights including birthday cake, guacamole, bread, and corn on the cob. In order to keep up the excitement of our previous conversations, we decided to broaden the topic to food. We brought the idea to the kids in the form of an idea web and asked them to brainstorm different topics related to food. Initially students gave us small examples of kinds of food like chicken, and sushi. So we turned that into a topic of its own – "kinds of food." Then they began to think bigger. Here are some of the ideas they came up with:

Making this web together was such an amazing and exciting experience and we knew we had plenty to work with. Before the break, we decided to explore one of our topics together – "kinds of food." So we composed a long list of foods that we knew.

Next we challenged the kids to find connections. Some kids noticed that a few of our foods are yummy together like peanut butter and jelly. But we pushed them to deepen their thinking. Could we come up with some groups to separate the list into? That's when kids began suggesting different food groups and we came up with: dairy, meat, grains, fruits, vegetables, nuts and beans, vegan foods, foods from around the world, and finally "sometimes foods," which we decided sounded more inclusive and less judgey than "desserts" or "junk food." We actually created our own food groups! 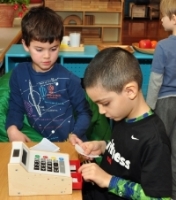 At this point in our study, it seemed like a good time to take a field trip and talk to an expert. Who better than Chef Bobo? So in order to learn more about him and his kitchen, we came up with a list of questions and, despite frigid temperatures, trekked over to "Big Calhoun," where we met the chef in the Calhoun Commons and began our interview. We learned that Chef Bobo began cooking at age six and that his first teacher was his grandmother. He explained that Calhoun gets all of its ingredients from local farmers and that he and his other chefs make everything from scratch and never use processed foods. We also learned that Chef Bobo is from New Orleans and that his favorite thing to cook is gumbo! After the Q&​A, Chef Bobo took us on a behind-the-scenes tour through the maze of the kitchen. Inspired by our trip, we moved on to explore more of the topics on our idea web like “places to get food” and “jobs in food."

As our study continued, we had the good fortune to meet with another expert! Jarno's dad, Matt, who is a restaurateur, came in and talked to us about how restaurants really work. We learned about all the different jobs that people do behind the scenes. Matt helped us set up a mock restaurant. Some kids were customers, while others held job titles like maître d', chef, expediter, vegetable chef, grill master, food runner and dishwasher. Who knew how many people were involved in preparing food in restaurants?

After the dramatic play, we had a chance to ask Matt for some advice. We asked what the next steps should be to open our own restaurant and what jobs we would need to do. He advised us that we needed a name, some advertising, equipment, a menu, and a variety of different workers. Our ideas about starting our own operation were really beginning to solidify.

In our next meeting we began to brainstorm ideas for a name. After engaging in a bit of dramatic process, we elected the name The Mountain Goat Café, which we will be opening soon. 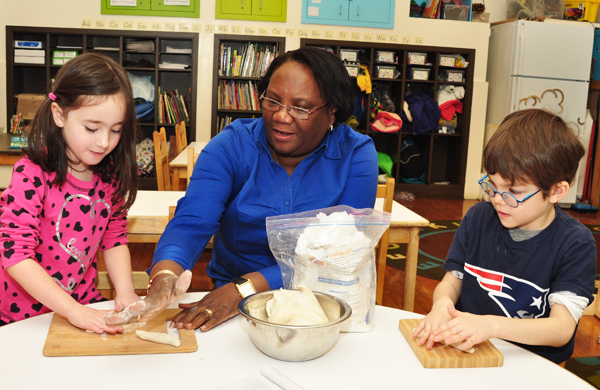 Meanwhile, we began to broaden our food study into an exploration of food cultures around the world. We made a list of cultures that we have experienced which include Chinese, Italian, Mexican, Japanese, Indian, Ethiopian, English, Spanish, Greek, French, Korean, Norwegian, and Caribbean. These kids are definitely cultured eaters!

We had a chance to talk with a very special expert--our own associate teacher, Yvonne. Yvonne told us all about the foods and flavors of the Caribbean island where she grew up, Saint Vincent. She told us that most people grow their own fruits and vegetables and buy few food items in stores. She told us about the fruits that grow on her property and showed us some of the spices that she collected during her last visit. We looked at ginger, cinnamon bark, cloves and nutmeg and learned how they grow, about their flavors, and how they are used in food. We all got to smell each spice. The kids had so many insightful and impromptu questions for Yvonne and we were really impressed by their interviewing skills. Thank you, Yvonne for such a special morning!

Stay tuned to hear how our study continues to develop.