Reflecting on the Power of Words

Every year, MS English teacher Larry Sandomir introduces his seventh graders to the power of language and its potential to create beauty, magic and change. His hope, he says, is to impress upon his students that even one person can change the world by using his or her voice.

Larry begins the year by introducing his students to Malala Yousafzai—a perfect example of the kind of power one young person can exert. Malala, they learn, was only 11 years old, living in Swat, Pakistan, when she first began writing a blog to advocate for girls’ education around the world. Three years later, a Taliban gunman shot Malala in the head because she would not stop her advocacy work. The murder attempt sparked a national and international outpouring of support that Malala used to become a prominent education activist. At 17 she became the youngest person in history to win the Nobel Peace Prize.

Larry’s students begin by watching a video of the stirring speech Malala made to the United Nations when she was 16. They read the words she spoke the next year, when she received the Nobel Prize. And they listen to songs dedicated to Malala or written in her honor—by Grammy Award–winning artists as well as many young musicians she inspired. With those powerful images in mind, Larry asks his students to reflect on the power of Malala’s voice and to respond—through written word or art. “The idea is for each individual to consider what language can do, for both good and bad; to make some sense of how words are used in the current political climate; and to recognize that the way we use words—orally or in written form—can lead to change.”

The class then moves on to studying works of literature where language is central to the story, language that Larry says (in his own personal poetics) “conjures previously unimaginable images; considers ideas never before thought of; and encapsulates phrases that adhere, like the strongest glue, to our souls.”

The students begin by reading Warriors Don’t Cry, the memoir of the Little Rock Nine by Melba Pattillo Beals, followed by The Absolutely True Diary of a Part-Time Indian, Sherman Alexie’s part-memoir, part-novel of some of his teen years on the Spokane Indian Reservation. Finally, they take on Markus Zusak’s The Book Thief, the World War II–era historical novel that features a gentle and inordinately fatigued Death as the narrator. 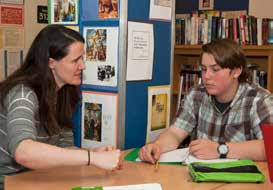 With each book read in class, the students are asked to read a companion novel at home that they have chosen from a list of books on similar themes. Once they have completed both novels, students are asked to bring the two stories together to help them reflect, through a choice of written or visual activities. Some choose to switch the main characters in the two books, and imagine how each character would respond to the events in the other’s story; some create a conversation between characters from each book, imagining how they might get along,
disagree or solve each other’s challenges; some create a work of art that reflects their observations. As the year’s study progresses, the students have the privilege of participating in a writing workshop with author Liz Murray, a writer, speaker and education advocate whose personal story is a testament to the power of words; writing, she says, saved her when she was a homeless teenager, and eventually propelled her to Harvard.

“Liz adds greatly to our students’ appreciation and application of the power of language,” observes Larry. “Her kindness, openness, talent and honesty embolden the seventh graders to search within themselves to places they have never known before, and find the words to express what they mean.”

For many of the students, their newfound confidence and voice—inspired by Malala, Liz, and the authors they read—is a revelation. Larry quotes Markus Zusak, who wrote in The Book Thief about the main character, Liesel Meminger: “When she came to write her story, she would wonder exactly when the books and the words started to mean not just something, but everything.” Or as seventh grader Ryan Galitsky noted in a poem about Malala, “The world is changing . . . one word at a time.”