Medals don’t drive Calhoun kids—passion does! But it doesn’t hurt enthusiasm one iota when Cougar participants in the NYC Regional Science Olympiad competitions return with a slew of medals—including a first-place finish. It’s just added proof that Calhoun students are becoming powerful contenders in these STEAM-based* contests. 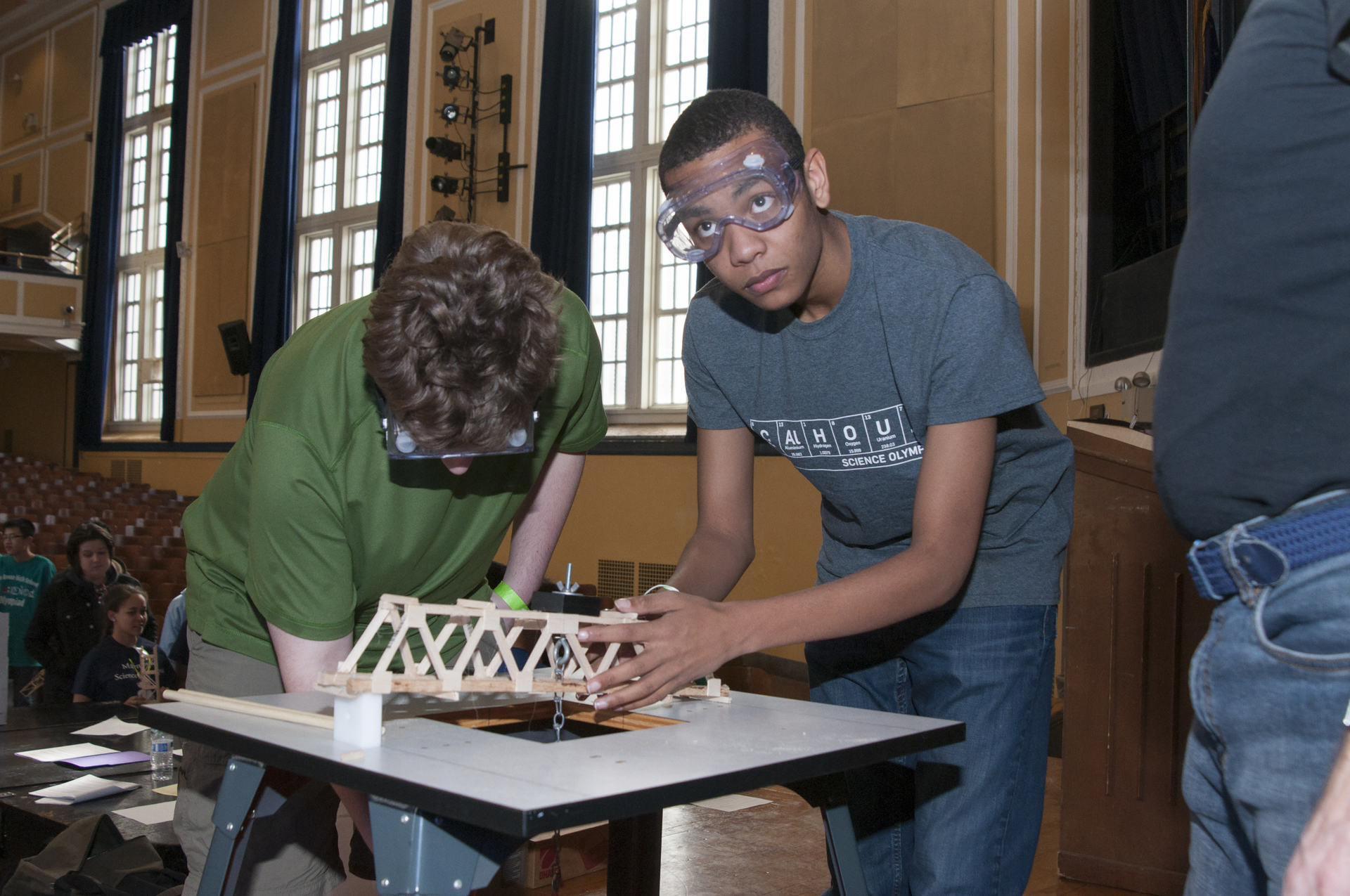 Kristin Nastos, the Middle School science teacher who started the Olympiad program at Calhoun, is thrilled by the success the kids are having. But she’s even more excited that their success is bringing in more student participants each year: “We started with only 12 kids three years ago as a Middle School after-school club—not even a full team for the first competition—and then added an Upper School club last year with many of our original students,” reminisces Kristin. “But this year we grew to almost four full teams!”

With the influx of students, Calhoun’s Upper Schoolers were able to compete this year in almost all of the events, finishing in the top 10 in three of the contests, from a field of 60 schools. Middle School students competed in all the events offered and finished the day with a grand total of eight medals—including a first-place finish in the fossil test by Middle Schoolers Trey Loizzo ’21 and Miles Sugarman ’21. Also noteworthy—Olympiad rookies won six out of the eight medals in the Middle School competition!

Kristin and fellow coach Alba Polsley are beside themselves at the enormous enthusiasm that has infused the Olympiad program in its short existence—especially considering that it requires a lot of work before and after school. But a personal thrill for these two Middle School science teachers stems from the fact that their Olympiad teams are populated by an unusually large number of girls—especially in the Upper School, where interest among girls has “spread like wildfire,” observes Kristin. She acknowledges that, “as females in the STEAM realm, Alba and I want to encourage ladies to think of themselves as science and math people, because it is such a male-dominated field.”

“Our school really encourages you to do what you want to do, what you’re passionate about. For girls, [that means that] if you are passionate about science, you can learn more about it and go into that field, and not feel afraid or judged.” —Gabby Chapman ‘17 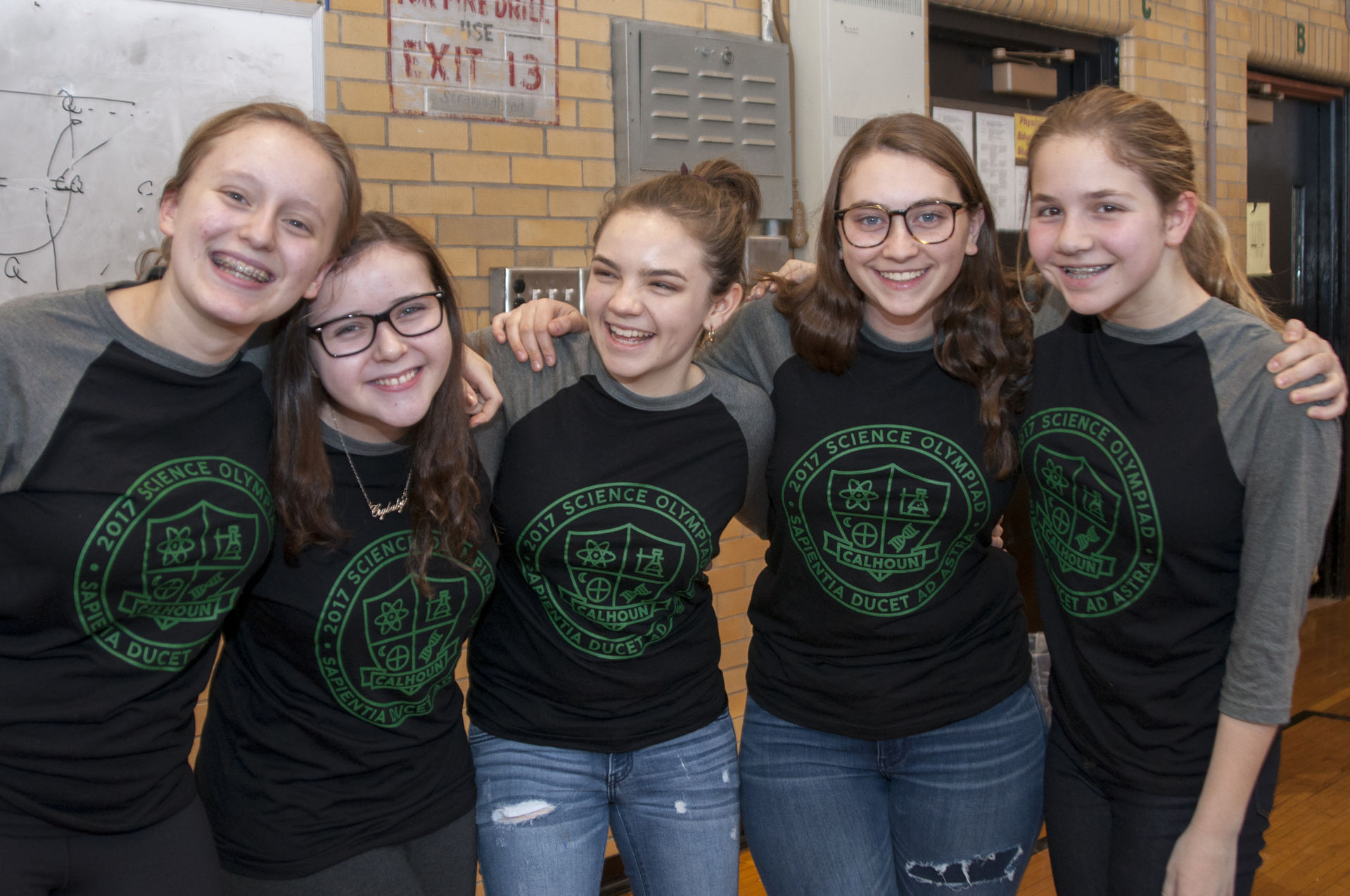 Clearly, their message is being heard and supported. “Our school really encourages you to do what you want to do, what you’re passionate about,” says Gabby Chapman ’17, a three-time Science Olympiad participant. “For girls, [that means that] if you are passionate about science, you can learn more about it and go into that field, and not feel afraid or judged.” Two senior girls have already taken that message to heart: next fall, Lindsay Randle ’16 is heading to Union College and Zami Seck ’16 to Boston University, both pursuing engineering. Gabby says she’s “almost 100 percent sure” she’ll enter some sort of science, math, or STEAM field when she continues on to college; and teammate Caitlin Lung ’17, who says she has been inspired by the science courses at Calhoun as well as her role in the Science Olympiad, reports she is also considering engineering or science for her future studies.

Alba thinks that many Calhoun students are first attracted to the Olympiad competition because of the positive experiences they’ve had with the project-based science curriculum in Middle School—including the popular straw rockets unit in fifth grade and the hack ’n’ hurl catapult unit in seventh grade. The catapult unit tests the students’ understanding of force, potential and stored energy and requires them to work with mathematical precision, as well as draw on woodshop skills and artistic flair for the design of the catapult (not to mention costumes!). “Students become deeply engaged in the engineering design process—for planning, testing, redesigning and retesting,” says Kristin, who notes the level of collaboration the project requires. “It’s a lot of fun to watch them problem-solve and be solution-oriented.” But even though it’s a competition, she also notes that the students are always less concerned about how far the projectile goes or who wins than they are about the experience and process of building something, trying to figure out why it doesn’t do as well as they wanted, and then watching it work. “Calhoun kids always ask why,” says Kristin. “They question everything. ‘Why am I doing this? Why should I do it this way?’ And that’s the joy of being here—it’s that there is no set way to do anything; if you want to come up with a different way of doing something, then go for it, and we will support you. It’s learning from the experience and moving forward.”

This emphasis on process and risk-taking follows students throughout their years at Calhoun—and not just in science classes. Gabby notes that, even in her Upper School English and calculus classes, she’s been engaged in hands-on, project-based activities. “I think Calhoun really emphasizes experiential learning, and it really helps students understand what they are doing.”

Zak Wegweiser ’17 believes that the science classes at Calhoun have “inadvertently been preparing us for [this kind of] competition all along,” because of the school’s emphasis on inquiry-based learning. And although his team didn’t score as high as he would have liked, he calls the Olympiad experience “beyond valuable.” Reflects Zak, “Throughout the preparation process, our team learned so many science principles, from the physics of a pendulum to the biology behind certain bugs and fossils. I personally learned a lot about physics, and got to have fun with my friends, learning about mirrors and lasers, water and time, and all sorts of amazing stuff.”

“Throughout the preparation process, our team learned so many science principles, from the physics of a pendulum to the biology behind certain bugs and fossils. I personally learned a lot about physics, and got to have fun with my friends...” —Zak Wegweiser ‘17

“It’s the thrill of the ride that motivates our students, not the finish line. Even if we don’t place, the kids have so much fun trying something totally different,” says Kristin. Evidently, her students agree. Lucas Chapman ’19 returns each year to the competition because “it’s a good source for me to be creative and to explore what I like; it helped me narrow down what I enjoy doing and what direction I might want to take.” Cody Wolf ’21 likes the freedom to “choose what we want to do, and . . . to do it independently.” Seventh grader Liam Hade gives a pretty direct reason for participating: “Well, we love science!” But even students who don’t know whether they “love science” or identify as “science kids” are discovering the joy of both the journey and the camaraderie. Sixth grader Sokhnamai Kane says she decided to enter the Science Olympiad this year “because I really wanted the challenge. And having my friend as my partner during the competition made it so much fun!” 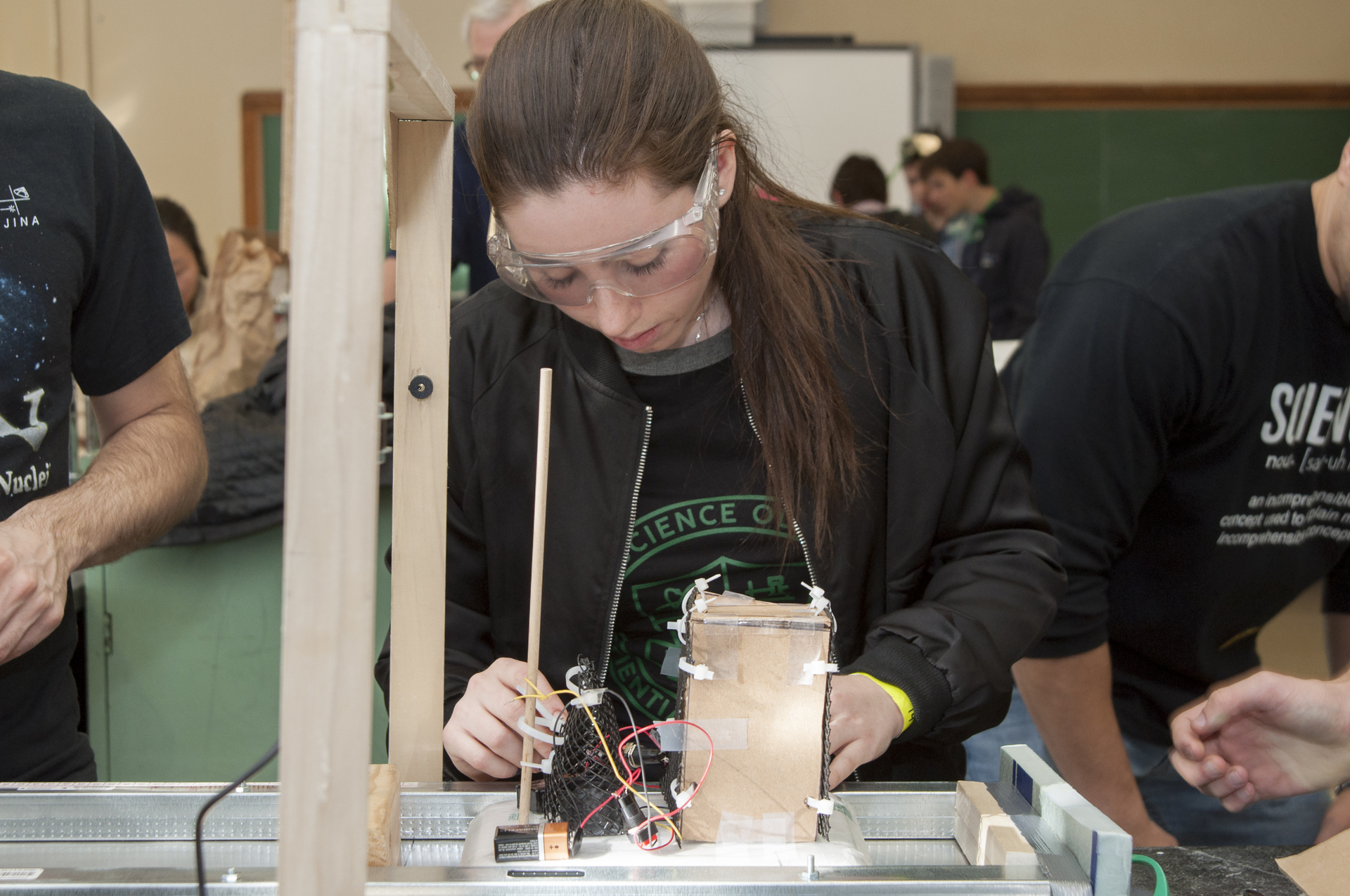 The Olympiad invites students to participate in a range of tasks, some of them research-based. In fact, many are college-level challenges, covering environmental science, physics, astronomy, biology and geology. But even though not all of the contests are project-based, and some of the material covered is outside a Middle or Upper School curriculum, the Science Olympiad is, in many ways, an extension of the interdisciplinary STEAM-based projects that our students have come to love. Some even view the traditional tests as “projects,” because of the way they need to gather and prepare information to make sense of what they are doing. Kristin attributes our students’ success at the Olympiad, whether it be in the project-based events or on the tests, to their willingness to take risks and collaborate. “Calhoun kids are so used to group projects and all the excitement that comes with it; they always find ways to make it work. They are just unafraid to try anything.”

The Olympiad also resembles a sport. The students have to practice collaboratively as well as individually—supporting each other and testing their skills—before competing as a team against some of the best schools in the region. It is this collaborative aspect, says Alba, that resonates and speaks so well to the strength of our students. So while competition is not inherent in the way learning happens at Calhoun, skill at collaboration gives our students an edge. Kristin, Alba and the students have high hopes that the Science Olympiad program will continue to grow—and there’s evidence that will happen.

This year alone, there were 19 students new to the competition in the Middle School; most of them expressed interest because they had heard from friends how much fun the Olympiad was. And much like a successful athletic program, the better the teams perform, the more students want to join! But the big news is, the Science Olympiad is moving from club status to being a full-fledged curricular elective in the Middle School next year. Notes Alba, with satisfaction, “Calhoun is about to give the Science Olympiad the importance that it deserves!”